Pine tree substrate (PTS) components are becoming more prevalent in today’s greenhouse substrate mixes. Two different PTS components were engineered to serve different roles in substrate dynamics. Pinewood chips (PWC) were made from chipped logs and shredded pine wood (SPW) was made from shredded logs. In this work, these two PTS components were tested for hydration efficiency, hydrophysical properties, drainage profiles, and unavailable water, while simultaneously being compared to more traditionally used greenhouse substrate components (peat, coir, aged pine bark, and perlite). Pinewood chips were quite similar to perlite and aged pine bark inability to increase aeration and drainage while having high hydration efficiency levels. Conversely, the SPW resulted in a more “peat-like” component with higher water holding capacities yet surpassing peat in hydration efficiency. The two PTS components were proven to have more influence on mix dynamics when incorporated in a substrate in comparison to perlite. This resulted in smaller quantities of PTS required to achieve similar results of perlite in a mix. Another objective of Jeb’s research was to determine a more accurate method of determining unavailable water in a greenhouse substrate. The most commonly used method involved pressurizing the substrate to -1.5 MPa, and measuring the moisture content of the material. It has been hypothesized that samples lose hydraulic connectivity during this process, causing them to not release moisture past a specific pressure. As a result of this unavailable water has previously been overestimated in substrates, and therefore available water was underestimated. Using dewpoint technology, direct water potentials of a substrate are able to be determined. The pressure plate values for unavailable water of common organic greenhouse substrate components were between 25 and 35% moisture by volume. All materials tested using dewpoint technology were shown to actually have little variation in moisture content at -1.5 MPa, with all having between 4 and 8% by volume moisture. This leads to the hypothesis that substrates, comprised of these and other similar organic materials, will have unavailable water levels of under 10% by volume, a lower amount than previously reported. 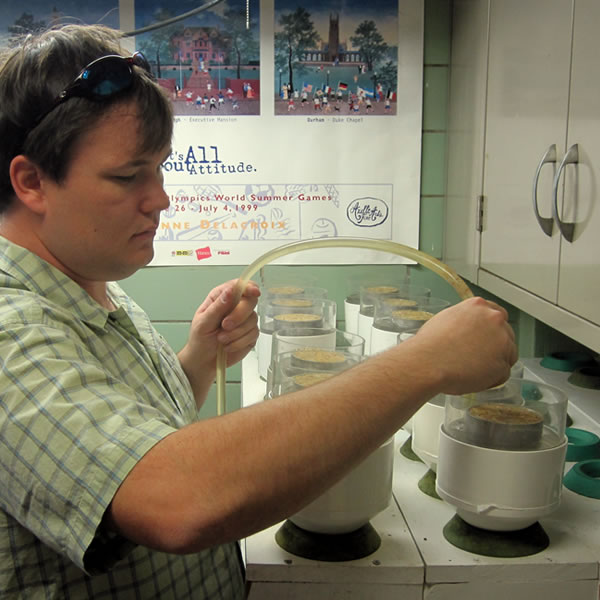